Founders of the Ministry 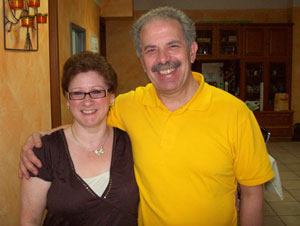 The founders of the Ministry are Rev. Alex Tana and Mrs Christina Tana. They both have extensive ministerial, preaching, teaching and counselling experience both in the UK and abroad. They combine this with a great love for God, a passion for his presence and his joy and above a strong commitment to save the lost and plant new churches.

Rivers of Joy Ministries was started in January 2000by Rev Alex Tana and his wife Christina after that Alex had received a series of powerful revelations and visions from God in January 1999. Other visions and words of confirmation followed immediately after. It was also during these revelations that God Himself gave Alex the name of the ministry out of Psalm 46: 2 (TLV) where it says that "a river of joy flows through the city of our God". Given the original vision received (see below) Alex adopted that name by simply putting it into the plural. Hence Rivers of Joy was born!

One morning as Alex was deep in prayer he was shown planet earth as if he was on a space shuttle looking down to earth. As he watched a bit closer he noticed that all over the earth there was what could be described as a net where the knots where springs of water and the links were rivers connecting each spring together. As Alex enquired as to the meaning of all this, God spoke these words: "This is the new work that I am releasing and entrusting to you all over the world with a fresh apostolic anointing. The springs of water are my churches all over the world and the links are the rivers of new life that will connect each church together as in a net covering the whole word with my blessing and my joy."

Rev Alex has been a Christian for over 30 years and a leader for over 25. During his spiritual life he has covered many position of Christian leadership with particular emphasis on pastoral and teaching roles. He has planted and led many churches both in the UK and abroad until the Lord called him to the apostolic role within Rivers of Joy Ministries. He has a great anointing for spiritual leadership and organization, healing ministry, prophetic and preaching/teaching. He is the author of several books (for the latest ones see under Publications) and of countless articles and blogs. A very powerful speaker he is a welcome guest in many conferences all over the world. In addition to all his spiritual gifts and ling experience of Christian ministry and Christian organizations Alex has also an extensive business knowledge and experience that he has put to good use in the ministry and outside especially in the areas of leadership, business start-ups, personal and business development and networking. In 1999 Alex was diagnosed with a degenerative eye sickness which has left him partially blind. But just like the apostle Paul this situation has not stopped Alex; on the contrary it has spurred him to work harder than ever for the Lord, to spend more time in prayer and listening to the Lord and to fulfil the mandate that God has given him.

Christina (Chris) has been a Christian for about 30 years now just as long as she has been a faithful and committed wife of Alex. She has been a great mother to two daughters and a strong supporter of Alex’s calling to ministry and a column, both financially and in prayer, of Rivers of Joy Ministries since its very beginning. Chris has for the last 30 years been involved in care work for the elderly at first and later for mentally disabled people. She has a great ministry in her own right for women and especially for young girl with eating disorders (something she personally experienced as a teenager).